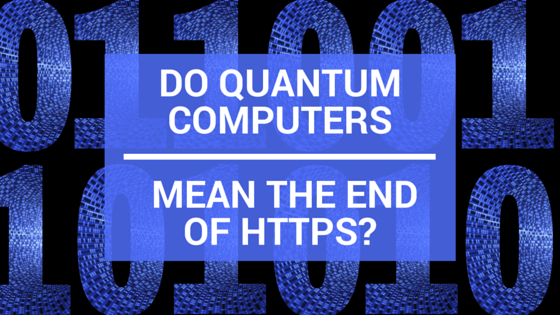 Do Quantum Computers Mean the End of HTTPS?

In my previous article, "5 things you should know about HTTPS encryption", I explained how HTTPS can fail to encrypt your web connection when web servers are not well configured and end up not using the 2048-bit prime key. As mentioned, this setup nowadays turns out to be the only secure one, compared to the use of weaker prime keys which are potentially vulnerable (the 512 prime key or the 1024 prime key). The security guaranteed by the 2048 prime key lies in the fact that most performing computers would spend thousands of years before being able to try out all the combinations necessary at decrypting the encrypted connections.
This is still valid today but might not be valid in the future when quantum computers could be common and used for malicious purpose.

Quantum computers are computation systems that make use of quantum phenomena to perform operations on data. Because of the properties of quantum bits (qubits), these machines have the ability to perform demanding operations on a very small number of bits compared to the number used by common digital system spread nowadays. While quantum computers will have huge benefits in multiple research areas, they could be maliciously used to solve complex problems that are at the base of modern cryptography.

Even though quantum computers are still small and experimental machines, Google considered this hypothesis and announced in an article posted in July 7th, 2016 (“Experimenting with Post-Quantum Cryptography”) to be working on a new cryptography algorithm called “post-quantum cryptography”. The project must guarantee that future connections would stay encrypted as now, and assure that any internet communication of today could not be retrospectively decrypted in 20-40 years, when large quantum computers could be built. At the base of this new algorithm, there is the adoption of the Ring Learning with Errors (RLWE) computational problem. Because of the presumed difficulty of solving the RLWE problem even on a quantum computer, RLWE-based cryptography may form the fundamental base for public key cryptography in the future just as the integer factorization and discrete algorithm problems have served as the base for public key cryptography since the early 1980s.